January 6th - A Bit of Heir-Pulling 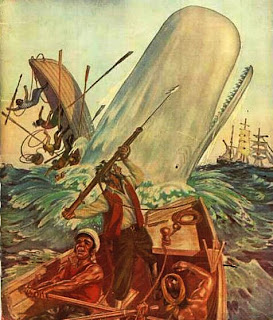 Herman Melville opened his classic 1851 tome, Moby Dick, with his narrator speaking these words. This homeless, hapless wanderer boarded Captain Ahab’s doomed ship, The Pequod, in search of adventure and meaning. Instead, he encountered a daunting and dangerous voyage, as both waves and the whale tossed the ship about.

Of course, Melville drew this allusion directly from Genesis 16. This familiar account includes the story of Sarai suggesting that her husband Abram procreate with her maidservant Hagar to facilitate the Lord God’s promise of an heir. At their advanced age, both Abram and Sarai probably wondered how God could possibly give them a child, even though He had specifically said he would do so. In their doubt, Abram and Sarai engaged in a bit of heir-pulling, seeking to obtain a child.

Abram and Sarai might have shipwrecked their faith, had God not mercifully intervened.

Hagar conceived and bore son, Ishmael. Eventually, about 15 years later, Sarai (then Sarah) and Abram (then Abraham) were blessed with baby Isaac, the promised child. Feeling jealous and threatened by Hagar and her teen son Ishmael, Sarah urged Abraham to cast them out to wander in the wilderness. 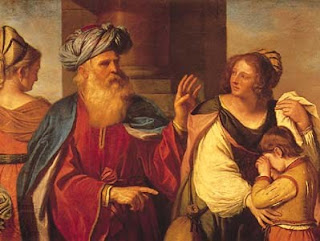 Abraham Driving Out Hagar and Ishmael

Eventually, Ishmael reentered the house of Abraham, but the familial tension remained. Perhaps Abraham found himself pulling out his own hair in distress, as he observed the division and stress within his own household.

Ishmael became the ancestor of the northern Arabian (Muslim) peoples, as Isaac became the forefather to the Jews. What a lineage of rivalry and conflict was begun.

Most likely, Sarah and Abraham were well-intentioned, as they sought to assist God in executing his plan for building His holy people. These two were surely practical.

How often do we attempt similar steps? Do we try to help God orchestrate His purposes? Do we seek His direction, or do we merely invite His participation in our own plans? God allows us to participate in His eternal purposes, but He surely could accomplish them more readily without our often feeble and fallible efforts.

What a gracious God He is, who invites us to take part in His work. First, He coaxes us to join Him. Then He supplies and equips us for the task. Finally, He rewards us for whatever worthy attitudes and actions we may offer. Although this may not always seem the most efficient means of getting the job done, God has made it clear that He is more interested in developing pure hearts than productivity reports.

Will we engage in heir-pulling, as Sarah and Abraham did? Or will we step out of the way and watch for God’s miraculous power?

How we long for God to build our balance, showing us when to wait and when to act. How many miracles do we miss, because we are distracted by our own efforts to fulfill God’s purposes?

Your Word is filled with remarkable promises,

Which You have vowed to fulfill.

Lead us to learn when to move

And when to be still,

So we will not miss

Your matchless power at work.