God’s Son, part of the divine and holy Trinity, yielded to God the Father to accomplish the divine purpose of redeeming mankind from the power sin and death.

That’s a very full sentence, chock full of theology and spiritual truth. In a nutshell, it means Jesus agreed with the Father that we were worth saving. 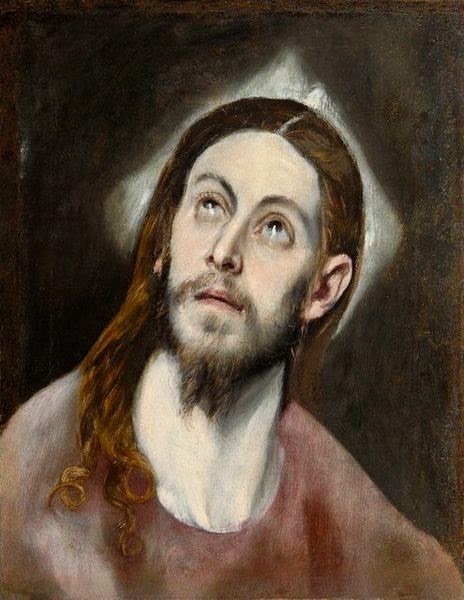 [Jesus] being in very nature God, did not consider equality with God something to be used to His own advantage; rather, He made Himself nothing by taking the very nature of a servant, being made in human likeness.

And being found in appearance as a man, He humbled Himself  by becoming obedient to death – even death on a cross!


Therefore God exalted Him to the highest place  and gave Him the name that is above every name, that at the name of Jesus every knee should bow,  in heaven and on earth and under the earth, and every tongue acknowledge that Jesus Christ is Lord,  to the glory of God the Father.(Philippians 2:6-11, NIV)

Head of Christ, by Spanish Renaissance artist El Greco (1541-1614), is a striking image, I think. Looking up, Jesus appears to have His eye on the Father and His will. For millennia, Bible scholars have pondered whether Jesus had full revelation of the road before Him, during His earthly ministry.

If the Son does not know the day or time of His second coming (See Matthew 24:36 and Mark 13:32.), is it possible that the Father possesses additional knowledge yet unshared? Could it be that Jesus was asked to trust God’s plan, even without knowing all of the specifics of how that might unfold?

Yet He yielded. And He asks us to yield to God as well.

Yikes. That’s not easy, even when we know it’s the best thing for us. It’s hard, although we know, deep in our souls, that the Father’s plan is designed to turn out better than anything we might attempt to devise.

Therefore, I urge you, brothers and sisters, in view of God’s mercy, to offer your bodies as a living sacrifice, holy and pleasing to God—this is your true and proper worship. Do not conform to the pattern of this world, but be transformed by the renewing of your mind. Then you will be able to test and approve what God’s will is—His good, pleasing and perfect will.

Yep. Yielding isn’t easy. But God is glorified and pleased by it. And it makes us more like Christ.

Yielding is saying “Yes” to God, especially when our feelings urge us otherwise. And we cannot do it without an abundance of His help.


The Scripture memory tips series is ongoing, but the April A to Z Blogging Challenge has started, and Heart of a Ready Writer is participating again this year. Watch for the Bible memory series posts, which may be interspersed with the Pictures of Jesus series during the month of April.