How long can followers of Christ walk with Him without knowing it is He? That may sound rhetorical or even accusatory, and it’s not meant either way. If we’re not really paying attention, any of us can miss His Presence in our daily lives - just like Cleopas and his traveling companion, who walked seven miles from Jerusalem to Emmaus with the risen Christ.

Only they didn’t know it was Him. Actually, He had just been crucified, laid in the tomb for three days, and risen from the dead. This encounter happened on His resurrection day. Clearly, the two men weren’t expecting Jesus to walk up and join their journey to Emmaus. They assumed they were inviting a stranger to dine with them upon arrival at their destination.

The Scripture even says, “They were kept from recognizing Him” (Luke 24:16, NIV). Maybe God was setting them up for the delightful surprise. 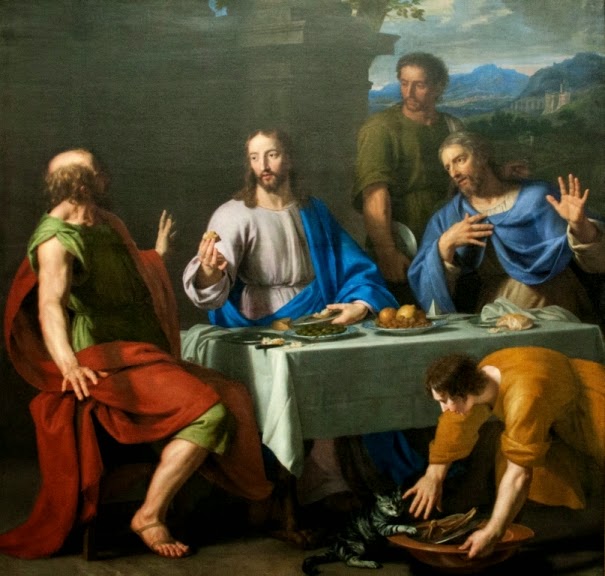 Supper at Emmaus, by 17th Century Flemish painter Jean Baptiste de Champaigne (1631-1681), looks like a wonderful reunion of friends. As the biblical account reveals, the scene had changed dramatically, once the men recognized the Lord.

When He was at the table with them, He took bread, gave thanks, broke it and began to give it to them. Then their eyes were opened and they recognized Him, and He disappeared from their sight. They asked each other, “Were not our hearts burning within us while He talked with us on the road and opened the Scriptures to us?” (Luke 24:30-32, NIV)

In the painting, Jesus holds out the broken bread to His friends. That means He has already blessed it and broken it. So they’ve seen Him for who He is. Hallelujah.

I pray I recognize Him readily, every time He walks by me.

Once He returns in glory, there will be no mistaking Him. But daily? It’s sometimes all too easy to overlook His Presence and His hand that guides my steps.