Jesus is the Victor, triumphing over sin and death. And that’s worth marking all year round, not just on Easter. For the Christian, that’s why we live.


The sting of death is sin, and the power of sin is the law. But thanks be to God! He gives us the victory through our Lord Jesus Christ. (1 Corinthians 15:55-57, NIV)

And Christ’s own victory belongs to all who belong to Him, because He has already won the eternal battle.

No, in all these things we are more than conquerors through him who loved us. For I am convinced that neither death nor life, neither angels nor demons, neither the present nor the future, nor any powers, neither height nor depth, nor anything else in all creation, will be able to separate us from the love of God that is in Christ Jesus our Lord. (Romans 8:37-39, NIV)

The Lord’s victory was sealed when the rock was rolled away, and He rose from the dead to walk out of the tomb after three days. What a moment that would have been to see! 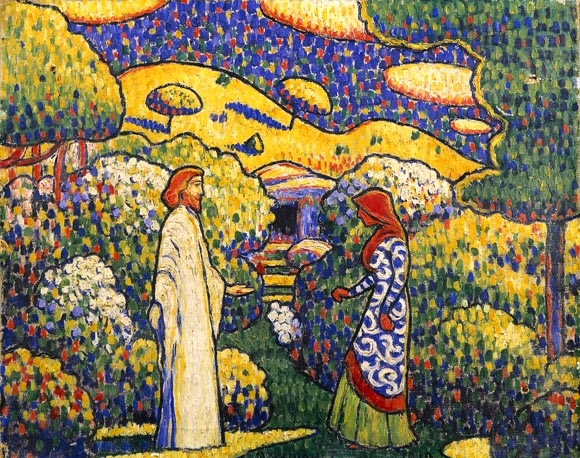 I love the cheery bright colors and almost cartoonish celebratory feeling of Christ Appearing to Mary, by American Modernist artist Edward Middleton Manigault (1887-1922). Forgive me for saying so, but it looks a little as if the entire picture were done in multi-colored jelly beans. Somehow, that seems appropriate, as Jesus transformed death to life, sorrow to joy, and mourning to dancing.

It cheers me to see the garden in full bloom around Jesus and Mary, as they stand before the open and empty tomb. The whole illustration speaks of life and joy and a bright future.

And so does the victorious Savior.