Throughout history, people have tried to paint the Messiah as a political figure. Before His coming, they hoped He would arrive to destroy dictators, overturn military occupations, and wage war against all sorts of territorial and ideological enemies. Since His earthly ministry, many have tried to squeeze the Savior into various partisan boxes.

Although the Lord clearly cares about issues of ethics, morality, and human interest, He most definitely has bigger plans for mankind as a whole.

Maybe that’s why the “Render Unto Caesar” Bible story is so telling. 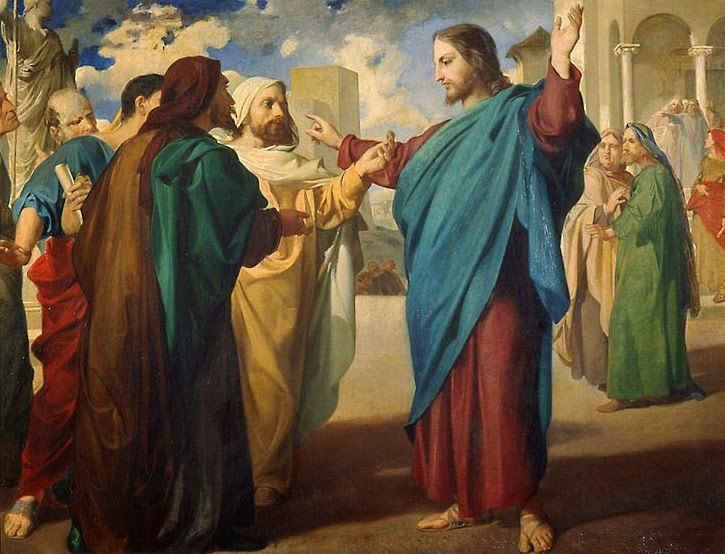 Then the Pharisees went out and laid plans to trap Him in his words. They sent their disciples to Him along with the Herodians. “Teacher,” they said, “we know that You are a man of integrity and that You teach the way of God in accordance with the truth. You aren’t swayed by others, because You pay no attention to who they are. Tell us then, what is Your opinion? Is it right to pay the imperial tax to Caesar or not?”

But Jesus, knowing their evil intent, said, “You hypocrites, why are you trying to trap me? Show me the coin used for paying the tax.”


They brought Him a denarius, and He asked them, “Whose image is this? And whose inscription?”

Then He said to them, “So give back to Caesar what is Caesar’s, and to God what is God’s.”


When they heard this, they were amazed. So they left Him and went away.

Spanish Realist painter Antoni Caba (1838-1907) pictured this incident in his work titled The Tribute of Caesar. In Caba’s painting, Jesus holds His hands up, as if to silence extra political debate and solve the key issue at hand.

Jesus was willing to raise a ruckus, when it was appropriate to the Father’s plan. He toppled tables in the Temple (See John 2.). But this time, He held His peace.

Jesus is practical. He maintains His proper perspective, even when life gets complicated.

The Romans were oppressing the Jews in all sorts of ways, including unfair taxation. Obviously, Jesus wouldn’t espouse such practices. At the same time, timing is everything.

The Tribute of Caesar
by Antoni Caba
1863