I’m not sure anyone will fully grasp the concept of Jesus being both fully God and fully man – at least, not this side of Heaven. I believe and embrace this completely, even if I cannot fathom how it can be so.

Can we completely comprehend how the King of Kings and Lord of Lords suffered fatigue and anguish and even death? Do we understand how He grew so overwhelmed with soul-grief that He needed the angels to comfort Him, as He agonized in prayer in Gethsemane (right before His arrest and crucifixion)? 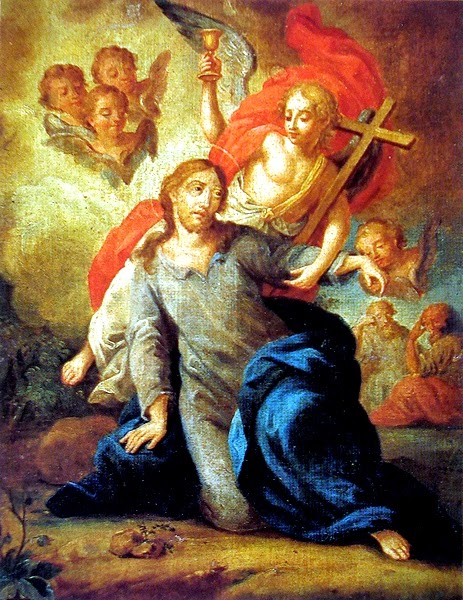 And yet He did.

Brazilian painter Bento Jose Rufino da Silva, who was also known as Bento Jose Rufino Capinam (1791-1874) captured this moment in his work titled Christ in the Garden. With the apostles dozing in the background (perhaps full from the Passover Seder they had just shared), angels lifted the Lord from His blood-letting prayer over accepting His Father’s will.

He withdrew about a stone’s throw beyond them, knelt down and prayed, “Father, if you are willing, take this cup from me; yet not my will, but yours be done.” An angel from heaven appeared to him and strengthened him. And being in anguish, he prayed more earnestly, and his sweat was like drops of blood falling to the ground. (Luke 22:41-44, NIV)

Surely, Jesus knew the genuine human suffering, as well as the supernatural agony, that His path would soon include on our behalf.