God fights for His people. The ultimate battle was won at the cross, when Jesus conquered sin and death. Still, the Lord goes to the fore for us more often than we can fathom.
We often talk about God’s love and kindness, but we don’t seem to consider His righteous anger as frequently. We tend to struggle to understand how His mercy and His might fit together, and how the Heavenly One is also the Great Judge and the Mighty Warrior. 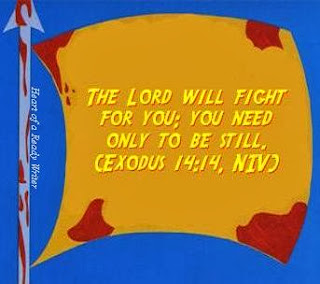 The Lord is love indeed. But He is also the voice in the thunder and the Victorious King of Kings.

The Prince of Peace has promised to guide and guard those who belong to Him. Although He may call us to stand and fight with Him, as He empowers us, He more often seems to ask us to put down our dukes and let Him work His wonders.

He may baffle those who seek to harm us, confusing assailants and pitting them against one another, as in many Old Testament battles. I saw this happen recently, though on a much smaller scale, when two different bullies turned their anger upon each other, actually forgetting the meeker one they’d both targeted initially.

The Lord may direct circumstances, removing threats from us altogether. He might even sweep dangers away with a swish of His mighty hand.

One way or another, His promise holds.

Of course, that may be the tallest order of all, especially when we’re all riled up.

Being still means standing strong, knowing the Winner fights for us. It means sticking around, rather than fleeing from danger. And it means trusting with a fierce confidence that turns doubt into daring, because we wear the Victor's colors.

Throughout the month of November, Heart of a Ready Writer posts favorite Scripture blessings in a series titled “30 Days of God’s Promises.” Why not bookmark, follow, or subscribe (free), so you won’t miss a single one? 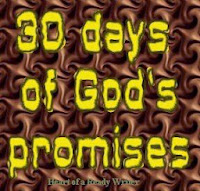 Image/s:
Scripture Graphic and
30 days of God’s Promises Graphic
Created by this user