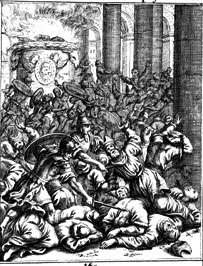 Jehu sat upon Israel’s throne, in approximately 840 B.C. The faith of the Israelites was going down the drain, with paganism permeating their lives. The children of God were being led astray, with their spiritual lives going to pot. In particular, the worship of Baal, or Ba’al (an ancient Eastern fertility idol), was swirling through their ranks.

Jehu moved to end this despicable devotion and eliminate the Baalist leaders.

A Festival to the Fertility Idol

King Jehu of Israel called an assembly, presumably to offer sacrifices to Baal. He ordered his leaders to summon the Baalist priests and ministers into the temple of Baal. Once the idolaters were in place, King Jehu instructed his military officers to annihilate the Baalists and burn the temple of Baal to the ground (see 2 Kings 10:18-28).

The sacred stone, or idol, of Baal was destroyed, along with those who ministered to it and led others in its false worship. 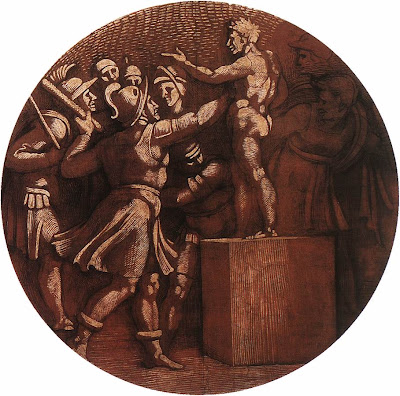 Demolition of the Sacred Stone of Baal

According to Scripture, the site of the temple of Baal actually became a latrine. In other words, the place of idolatry was truly laid to waste (see 2 Kings 10:25-27).

The Lord was pleased with King Jehu’s action, eliminating Baalist worship in Israel. God promised the throne of Israel to King Jehu’s descendants for many generations (see 2 Kings 10:30).

Although King Jehu flushed out the flagrant idolatry from Israel, he failed to offer his own heart singly to the Lord. Apparently, he led Israel to sacrifice to the golden calves within their boundaries. Instead of removing these disobedient distractions altogether to honor and obey God, Jehu followed the false practices of his fathers. For this, the Lord was displeased.

How easy is it for us to address the most obvious sins in our own lives, but overlook the more subtle ones? How tempting can it be to attack others for their false faith, flagrant sins, idolatrous practices and even slight shortcomings, but miss the idols we may carry within our own hearts?

What is an idol, after all? Isn’t an idol anything that replaces our devotion to God? May God reveal to our hearts anything that occupies the place and priority that rightly belongs to Him.

We long to worship only You,

For You alone are worthy.

And open our ears.

Show us any idolatry

In our own hearts.

Of paganism or pride

That we may hold

Make Your home within us,

We live to honor You.