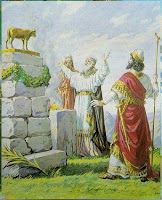 Yesterday, our Old Testament Bible readings included the account of the origins of the divided Kingdoms of Israel and Judah. Today, we focus on this in more detail.

After the Levites turned from Israel to Judah, leaving for Jerusalem, King Jeroboam began filling their priestly vacancies with unqualified leaders. Basically, anyone who was willing to perform sacrifices to Jeroboam’s two golden calves could become ordained to the priesthood.

A few years ago, our family attended a wedding in which we beheld a modern-day example of the same practice. The clergyman presiding over the couple’s nuptials was a self-proclaimed pastor of a church with which we were not familiar. Over lunch, we asked him about his congregation.

To our surprise, this apparent man of the cloth chuckled and commented that he had no parish or congregation. He explained that he had simply submitted a personal check to a certain mail-order ordination organization, responding to a classified advertisement in a popular secular music magazine. In return for his financial contribution, he had received a printed and embossed certificate of pastoral ordination.

But God was not amused. Shortly afterwards, King Jeroboam’s own son became deathly ill. Jeroboam sent his own wife (in disguise) to visit Ahijah the prophet for a comforting report. However, Ahijah (though blind) recognized her and offered a very different message. At the Lord’s instruction, Ahijah informed Jeroboam’s wife that the king’s son would indeed perish.

And it was so.

Meanwhile, in Judah, King Rehoboam was not without fault. Once his kingdom became established and strong, the king turned to idolatry as well.

The Lord allowed the Egyptians, led by King Shishak, to oppress Judah until His people repented and called upon His Name again. Shishak took Solomon’s golden shields from the palace, as well as treasures from the Temple.

The conflict between Israel and Judah persisted as well, with constant skirmishes. When Judah’s King Rehoboam died, his son Abijah ascended to the throne. But he was no more faithful than his father had been, fostering idolatry. Even so, Judah’s King Abijah was willing to repent and depend upon God for victory in battle with Israel.

When Judah called on the Lord, he granted them victory. The Scripture offers the secret to the outcome:

“He committed all the sins his father had done before him;

his heart was not fully devoted to the LORD his God,

as the heart of David his forefather had been.

the LORD his God gave him a lamp in Jerusalem

by raising up a son to succeed him

and by making Jerusalem strong.

and had not failed to keep any of the LORD's commands

all the days of his life – except in the case of Uriah the Hittite.”

What a legacy and promise. The Lord preserved the family lineage of leadership of His treasured David for generations to follow. David’s devotion led to blessing for his son (Solomon), his grandson (Rehoboam), his great grandson (Abijah) and many others afterwards.

What legacy are we leaving to our own children and grandchildren? How might our own faithfulness and devotion to God impact those who will follow after us?

Great and gracious and glorious One,

How we love You.

Remind us to live deliberately.

Grant us Your revelation

Nudge us to repentance,

If we carry any idolatries

And make us wholly Yours.

Place Your hand of grace

And build the foundations