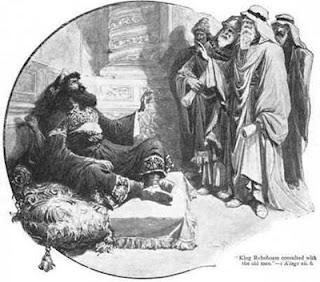 Rehoboam and the Elders

Young King Rehoboam, son of Solomon, consulted the elders of the kingdom for advice during his initial days on the throne. However, he rejected the advice from these sage seniors, choosing instead to heed the words of his own peers.

How differently might the history of God’s people evolved, if Rehoboam had chosen to listen to wise advisors, rather than those who merely humored him?

Rehoboam enforced heavy levies on the people. His dictatorial approach and harsh demands incited a rebellion. All of Israel’s tribes except Judah and Benjamin separated from the kingdom.

The divided domain was begun.

To the north, the departing tribes were led by King Jeroboam. Presumably to prevent the people from making pilgrimages to Jerusalem (in Judah) to make sacrifices, Jeroboam constructed local altars in the form of two golden calves.

Does this ring a bell? It surely does. (See Exodus 32.) We can only wonder why the people did not recognize the idolatry of the golden calves. Of course, we might also wonder why we may not recognize repeated idolatrous patterns in our own lives. (Ouch.)

The priests of Israel refused to perform sacrifices at the false altars. The Levites departed from their districts to join Rehoboam in Judah. The faithful followers joined the exodus to Jerusalem in Judah, rather than participating in the idolatry of King Jeroboam of Israel.

The rift was complete.

Our subsequent Bible readings will trace patterns of conflict between Israel and Judah. We may also discover how this tension may have made God’s people considerably more vulnerable to outside aggressors as well.

How do disagreements, idolatrous pursuits, unwise leadership, rebellion and other conflicts weaken our stand against spiritual and physical aggressors today? How do sin and false teachings cause rifts and leave God’s people more vulnerable to dangers and divisions?

To look to You

We live to honor You.

Make Your people one