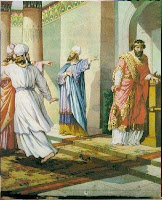 In the late Eighth Century B.C., Uzziah (or Azariah) was King of Judah. Uzziah’s regal power, as it all too often does, fueled his pride to the point of his own peril.

King Uzziah entered the Temple of the Lord at Jerusalem and attempted to burn holy incense. By doing so, he was not only ejected from the House of the Lord, but also from his own house, the royal palace of Judah.

The priests confronted King Uzziah and criticized his bold and brash action. Immediately, as King Uzziah argued with the priests of the Lord, his face became leprous. He was immediately removed from the Temple.

Leprosy may seem like a harsh price to pay for a little incense burning. However, King Uzziah clearly incensed the Lord with his brazen attempt to usurp priestly power. Although Uzziah held the God-granted position of King of Judah, he was not appointed or anointed to the holy priesthood. He was not a descendant of the priestly line of Aaron. He was not a Levite.

Certainly, King Uzziah had overstepped the boundaries of propriety and the rules of the Lord. The results were disastrous.

King Uzziah could not save his own skin.

This raises a burning question. In our zeal to serve the Lord, can we also be propelled by our own human pride to pursue positions to which our God has not called us?

May our Great Shepherd guide us to prayer before action. May He hold us back from roads to which He has not led us. May He place His gentle boundaries around us, to keep us safely and obediently walking the paths He has appointed for us. For only there may we fully please Him.

We want only to serve You.

Drive us to our knees,

And hold our hearts,

Where You will lead us.

The ministries of others.

Open our ears and our eyes,

So we may hear Your voice