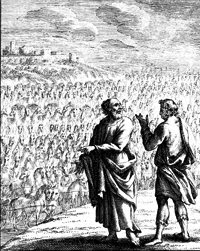 Elisha and His Servant Gehazi

In today’s Bible readings, we learn more of the ministry of the Old Testament prophet Elisha and the miraculous ways the Lord worked through him. Throughout these passages, Elisha is often referred to simply as “the man of God.” What a tribute these few simple words contain.

The Arameans planned to attack Israel, but God gave Elisha insight into all of their strategies. The King of Aram was furious, suspecting he had a spy among his top officers (see 2 Kings 6:8-12).

“This enraged the king of Aram.

He summoned his officers and demanded of them,

‘Will you not tell me which of us is on the side of the king of Israel?’

said one of his officers,

‘but Elisha, the prophet who is in Israel,

tells the king of Israel the very words

you speak in your bedroom.’”

What a wonderful and all-knowing God we have. No enemy may scheme against the Lord or His people without His awareness. Is the Lord not willing still to share His wisdom and insight with those who will ask and trust Him, if we will but listen?

When the Arameans actually mustered their forces for their assault on Israel, gathering their chariots and horses, Elisha saw the armies of the Lord assembled against them. He prayed for his servant Gehazi to share the same clarity of vision, seeing beyond what human eyes may perceive.

“When the servant of the man of God

got up and went out early the next morning,

an army with horses and chariots had surrounded the city.

‘Oh, my lord, what shall we do?’ the servant asked.

‘Don't be afraid,’ the prophet answered.

And Elisha prayed, ‘O Lord, open his eyes so he may see.’

Then the Lord opened the servant's eyes,

Do we have even the slightest awareness of the spiritual realm around us? How might our perspective and our actions change, if we caught a glimpse of the forces of Heaven assembled still around us? Would such a vision increase our faith? Would it sharpen our consciences? Would it alter our attitudes?

As the enemy army approached the Israelites, the prophet Elisha prayed that God would strike them with blindness. And it was so. The Arameans were captured and taken to Samaria, which was then Israel’s primary city. There, the Lord opened their eyes (see 2 Kings 6:13-23).

Surely, God has the power to grant both vision and blindness. Jehovah can call for triumph at His will, and it shall be so. Will we trust Him for vision and victory today? 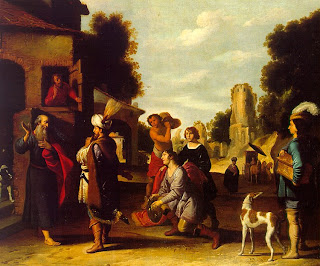 The Prophet Elijah and Naaman

Naaman, the Aramean army commander, was stricken with leprosy. His Israelite servant girl told Naaman’s wife about Elisha the prophet, suggesting he might heal her master. Naaman sent for Elisha. Elisha, the man of God, sent instructions for Naaman to bathe in the Jordan River for cleansing and healing.

Naaman rejected the prophet’s instructions. He was irate that Elisha did not visit him personally. He argued that the Syrian rivers were cleaner than the Jordan River. He balked at the words of the man of God.

Finally, Naaman obeyed Elisha’s instructions and dipped himself in the Jordan River. And he was healed from his leprosy (see 2 Kings 5:1-14).

Does not Naaman’s experience contain a lesson for any of us seeking healing today? Will we try to tell God how to heal us? Will we, in our human pride, attempt to dictate the terms of a divine miracle?

What healing or deliverance do you need from the Lord? Do you need a physical cure (as I do)? Are you suffering from emotional, financial, professional or relational distress? Does your spirit need cleansing from sin and shame through the redemptive power of our glorious God? What will you require for completeness? God is able, if you will only trust Him.

His answer may surprise you. Usually, the Lord’s miracles also contain teaching, if we will only listen. After all, isn’t our eternal healing His primary concern?

You are our Banner,

Leading us to Your victory,

Even in battles we cannot see.

You are the Lord of Hosts,

You are our Provider,

Meeting our every need.

You are our Healer,

You are our Peace,

Inviting us to come to You.

How we thank You.