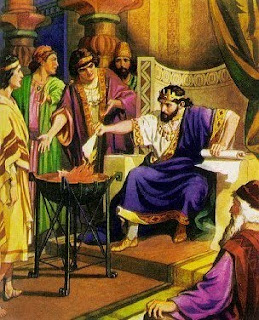 Have you ever worked tirelessly to produce a complex computer file or document, only to lose the entire thing to a gruesome glitch?

The Old Testament prophet Jeremiah would surely understand the feeling of frustration. So would the scribe Baruch.

Around 600 years before the birth of Christ, God instructed Jeremiah to write down the words of the prophecies the Lord had given to him in more than 20 years of prophetic ministry. Jeremiah enlisted Baruch the scribe to pen the words he dictated. Painstakingly they transcribed all of the lines onto a large scroll.

Jeremiah instructed Baruch to read the scroll containing the word of the Lord to the people gathered at the temple. As the scribe read, the royal officials of Judah listened, along with the people. They carried a report of the reading of the prophetic scroll to King Jehoiakim.

Incensed at the prophetic report, pointing to destruction and captivity, King Jehoiakim ordered a private reading of the scroll. As the scroll was read, Kim Jehoiakim clipped off sections and burned them in his fire cup. Finally, the entire scroll of Jeremiah had been reduced to ashes.

Jeremiah and Baruch repeated their labor of love, producing a second scroll of the Lord’s Word through the prophet.

Throughout human history, dastardly despots have attempted to hide or harm the Lord’s Word. Bibles have been banned in many regions of the world, and people have certainly been persecuted for reading God’s truth. Even so, Jehovah promised His Word will last. And His Word is true.

Thanks be to God for His everlasting Word.

Every word You speak is truth.

Your Word is power

For now and throughout the ages.

Burn Your Word into our hearts,

And build Your Word into our minds.

Carve Your character into us,

Of Your message of hope and truth

For a lost world.

May we honor You alone.