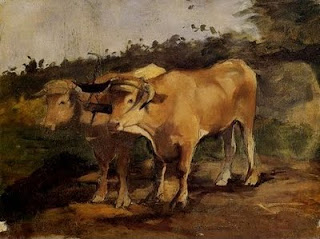 Jeremiah, an Old Testament prophet of the Lord, declared God’s Word to His people. Taken into captivity by King Nebuchadnezzar and the Babylonians, the children of God moaned and sought a message of hope.

False prophets arose, as they so often do, foretelling quick deliverance to satisfy the desires of the people.

But Jeremiah received a vision from the Lord. God revealed to Jeremiah that His people would remain exiled in Babylon for 70 years. The Lord instructed Jeremiah to make a yoke and wear it as a visual message.

What is a yoke?

Traditionally, yokes have been used to harness and control agricultural animals, serving as beasts of burden or laboring power. Pairs of oxen, for example, may be yoked together to pull plows or heavy wagons.

The yoke has also become known, throughout much of human history, as a symbol of enslavement.

The Lord warned Jeremiah that false prophets would claim power to break the Babylonian yoke of slavery of God’s people. But God Himself declared that only He could truly free them.

“'They will be taken to Babylon,

and there they will remain

until the day I come for them,'

'Then I will bring them back

and restore them to this place.'"

False prophets did indeed promise quick fixes for the people’s plight. In fact, the prophet Hananiah actually broke the wooden yoke from Jeremiah, claiming the Lord would free His people within two years. This message proved false, and Hananiah himself died within the year.

The Lord Jehovah is our Deliverer, our freedom fighter and the breaker of every bondage we may face. Will we call upon Him passionately, seeking His answer in His timing?

We call upon your name.

That hold us back

From the abundant life

You have planned for us.

All You created us to be.

We only live to honor You.