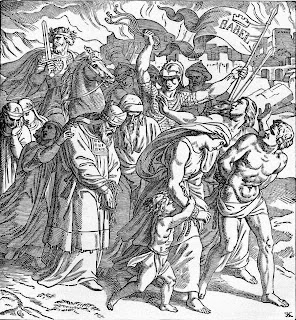 From: Treasures of the Bible

The Old Testament prophet Jeremiah announced the great and tragic deportation of the Lord’s people. King Nebuchadnezzar would order the pillaging of the temple of the Lord at Jerusalem and the royal palace of Israel, removing all of the valuables and placing them in the pagan temple to his own Babylonian idols.

What’s worse, the Babylonians would capture all of the leaders, fighting men, artisans and tradesmen from among God’s people. Even young king Jehoiachin (son of Jehoiakim) and his mother Nehushta would be taken.

The prophesy was fulfilled, as these events occurred (nearly 600 years before the birth of Christ).

“As the LORD had declared,

Nebuchadnezzar removed all the treasures

from the temple of the LORD

and from the royal palace,

and took away all the gold articles

that Solomon king of Israel

had made for the temple of the LORD.

He carried into exile all Jerusalem:

all the officers and fighting men,

and all the craftsmen and artisans –

a total of ten thousand.

Only the poorest people of the land were left.”

The army of King Nebuchadnezzar carted off all of the powerful and influential people of the land of Israel. They deported those they deemed useful. But they left the poorest of all, perhaps judging these folks not worth the effort. As a result, those who were assessed of little consequence were left alone.

In the big picture, does it pay to be rich and famous? One has to wonder sometimes. Certainly, positions of political or professional influence may paint targets on individuals’ backs, when enemies attack.

May the Lord protect all who trust Him, whether we hold low or lofty positions. Do our lots not come from His hand anyway?

Guard us from worldly woes.

Teach us to trust You,

Wherever You choose to place us.

If you lead us into leadership,

We will trust You to protect us.

If You shepherd us into servanthood,

We will trust You to guard us.

If we are captured

By a glimpse of Your glory,

So we may trust You