A Carpenter’s Song
“By a Carpenter
Mankind was made,
And only by that Carpenter
Can mankind be remade.”
Desiderius Erasmus Roterodamus
Dutch Renaissance Priest
(1466 – 1536)
PBPGINFWMY
Have you heard that one?
Many years ago, someone handed me a pin-on button with those letters printed on its face.
“What does that mean?” I asked.
“Please be patient. God is not finished with me yet.”
Hmm.
The Bible puts it this way, via the Apostle Paul’s letter to the early Philippian church:
“He who began a good work in you
will carry it on to completion
until the day of Christ Jesus.”
(Philippians 1:6b, NIV)
God, our Creator (and our Re-Creator) promises to finish the work He has started in us.
Do you know any carpenters? My own brother is a master carpenter. I have often been astonished at the remarkable things he has built, from heirlooms to whole houses. Carpentry astounds me, particularly because I can hardly hammer a single nail without harming my handiwork – or even my hand!
Jesus, the Father’s Son and also the son of Nazereth carpenter Joseph (see Matthew 13:55), is the ultimate Carpenter. He can build something out of nothing. And His specialty is rebuilding broken things, especially broken hearts and broken lives.
Guess what? He isn’t finished with me yet! 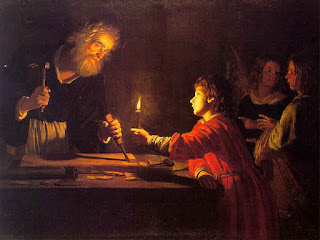 A Carpenter’s Song
The Carpenter builds from His heart
To transform my rubble to art.
Each pass of His plane
Does follow the grain,
His beauty and grace to impart.
No hammer of harm does He wield,
Although to the same did He yield.
Instead, He constructs,
Rebuilds and instructs,
Till His new creation’s revealed.
The process may take all my days,
As I pull against all His stays.
With masterful hands,
He saws, and He sands,
Creating a portrait of praise.
.
.
Image/s:
Childhood of Christ
By Gerrit van Honthorse
Displayed in The Hermitage of St. Petersburg