It's Super Tuesday, and Jesus is still King


Today is Super Tuesday in America. That means voters in 13 US states and one US territory will head for polling places to cast votes in the 2016 American Presidential primaries. Much is at stake in this election. Ethical, financial, global, moral, and political issues are on the line. And probably a few Supreme Court bench spots too. 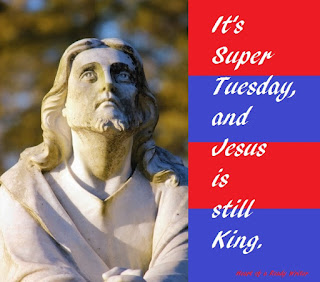 Everyone seems to be hot and bothered about the 2016 vote. And well they should be.

To those who live in Alabama, Alaska, Arkansas, Colorado, Georgia, Massachusetts, Minnesota, Oklahoma, Tennessee, Texas, Vermont, Virginia, Wyoming and American Samoa: Please vote today. Pray, and follow your heart, as God leads. May He direct you to choose a candidate who is willing to lead with good character and a willingness to hear from Him.

To all fellow citizens of faith: May we bathe this entire electoral process in prayer. Let’s pray for revival in the land. Let’s storm Heaven with pleas for the people of this great nation to return to the Lord. (Oh, and our time to vote is coming soon, if it hasn't already taken place.)

His kingly appointment comes from a much higher place (see John 18:36) than the American polling booth, for He sits at the right hand of the Father in glory (see Acts 2:33). He is the Son of the Living God, who is much pleased with Him (see Matthew 3:17). 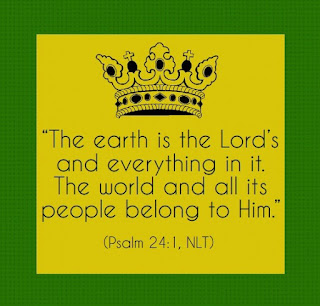 And we eagerly await that Day, when we shall see Him as He is (see 1 John 3:2). He will reveal His glory, and His Kingdom will come to earth.

Oh, and God will not be caught off-guard by the outcome of the American Presidential election. That's a sure thing.

“The earth is the Lord’s and everything in it.


The world and all its people belong to Him.”