I gave up chocolate, but not for Lent.


Sometimes a forfeit is not a fast.

Christians worldwide go without things they desire from Ash Wednesday to Easter, remembering Jesus Christ’s own 40-day fast in the wilderness. The faithful aim to dedicate increased attention to seeking God during this period each year. People forgo alcohol, candy, or desserts. Others skip television or swear off social networking. Some quit smoking. Plenty of people don’t eat meat on Fridays during this season of Lent.

I’m not slamming any of this. I salute the devotion behind it.

This year, I’m giving up chocolate, but not for Lent. As much as I love the taste of a crunchy chocolate bar, a sweet mocha shake, or a chocolate chip ice cream cone, I’m done with all things cocoa. I’ve had to face up to a difficult truth: Chocolate triggers my migraines. It’s just not worth it.

That’s a handy metaphor for sin. It seems fun for a moment, but the aftermath can be painful. The Bible calls it “the fleeting pleasures of sin” (see Hebrews 11:25, ESV). Chocolate is delicious, but I surely pay the price afterwards. 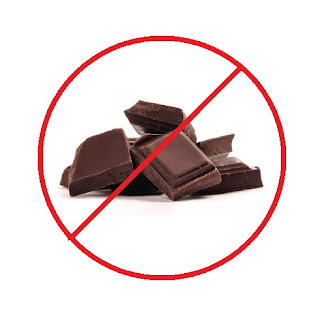 So chocolate is out – for now (in the Lenten season) and from now on. Well, when I wake up in Heaven with a brand-new resurrection body, I won’t have to worry about migraines. I’ll eagerly dig into some gooey chocolate treat at the Lamb’s marriage supper (see Revelation 19:6-9).

But my personal chocolate ban is not a Lenten sacrifice. I’m claiming no credit for it.

Don’t we kind of try that sort of thing sometimes? We stumble onto some seemingly good deed and allow others to salute us for it. But we didn’t actually do anything righteous at all? It’s not as if we deserve any reward for something we didn’t do on purpose.

“I the Lord search the heart and examine the mind, to reward each person according to their conduct, according to what their deeds deserve.” (Jeremiah 17:10, NIV)

My chocolate aversion is not a fast.

It’s not a sacrifice, even if I miss it sorely. I’m skipping this savored sweet because it makes me hurt. That doesn’t make it a gift to God or an avenue to deeper devotion.

In fact, some of my most earnest prayers have occurred when I have been in head-banging agony. How many believers would agree that suffering brings us to our knees more than comfort? (I’m not begging for more headaches here, just recalling when God has met me tenderly and faithfully in my most horrific moments.)

This year, I haven’t really given up anything tangible for Lent. In fact, I made a conscious and intentional decision not to do so this time around. Instead, I want to ask for more:  More devotion, more boldness, more faithfulness, and more deep desire to seek His heart.

Mostly I want more of God.

Chocolate has nothing to do with it.

Someday in eternity, I’d love to be able to echo David’s words:

“The Lord has rewarded me according to my righteousness; according to the cleanness of my hands He has recompensed me.” (Psalm 18:20, NASB).

Feel free to follow on GooglePlus and Twitter. Don’t miss the Heart of a Ready Writer page on Facebook. You are invited to visit my Amazon author page as well.
Posted by LA Nickers at 2:50 PM