At least, it does, if anyone is to reach the heights for real.

Sure, folks may try to fake it.

Apparently, a Pune man and his wife recently claimed to be the first Indian couple to climb to the summit of Mount Everest. The photos, supposedly taken in May 2016, turned out to be doctored from actual pictures taken of another climber’s lofty achievement atop the famous peak. Ironically, both Dinesh and Tarakeshwari Rathod have been identified as police officers. The two have been banned from eligibility for mountaineering certificates for 10-years by the Nepalese government.

Instead of getting points (so to speak) for even trying, the couple faces international shame and scorn.

Why would people lie about climbing to the summit of Mount Everest?

Perhaps they were trying to impress others. Possibly, they were afraid to return home and admit they had failed to complete the ascent. Maybe they just wished it had been so.

And if their photo-edited victory image had not been exposed as a fabrication, might they have nearly come to believe their own tale in time?

Could there be there’s a lesson here for all of us?

What happens when we become our own spin doctors? How often do we try to put our best feet forward, so to speak, roping others into believing we’ve accomplished more than we actually have? Have we ever tried on imaginary crowns, filled with make-believe jewels, in attempts to convince ourselves or others that our efforts have been worthy?

There’s no counterfeit for completing the climb. An imitation won’t lead to salvation, actual acclamation, or even momentary elation. A bogus achievement won’t bring the winner’s prize.

The Bible says God judges people’s secrets (see Romans 2:16) and that He knows the secrets of the heart (see Psalm 44:20).

When we try to fake it, we fool no one – at least, not for long. Definitely, God knows the difference.

How many believers long to reach the pinnacle of purpose?

Maybe we want to please God and bring Him glory by doing the best and the most we can. With His help, we might even stay on the right path awhile and climb farther than we ever dreamed possible.

But it takes God’s power and His push to take us to the top. If we hold onto Him, believing He holds us fast, He can take us to heights beyond what we ever imagined existed.

“Who may ascend the mountain of the Lord? Who may stand in His holy place? 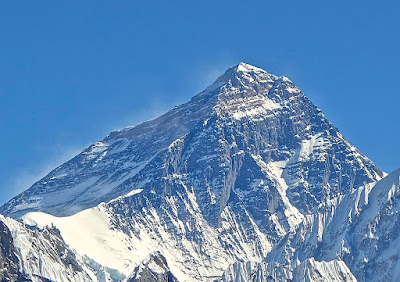 Feel free to follow on GooglePlus and Twitter. Don’t miss the Heart of a Ready Writer page on Facebook. You are invited to visit my Amazon author page as well.
Posted by LA Nickers at 4:51 PM